Gibraltar is odd, fascinating, stunning but just odd. As a British Overseas Territory, there are the familiar red phone boxes, red post boxes, familiar shops and banks in the main street, there are British Bobbies (policeman on the beat), but the sound is Spanish, the sky is too blue to be Britain and the prices are in pounds and euros, even £1.80 bus fare, and they drive on the European side of the road.

We drove a couple of hours from Seville, initially through flat plains, then hilly regions, but the Rock of Gibraltar stands out on the horizon from way back.

Gibraltar is a tiny piece of land, only 2.3 square miles, surrounded on three sides by sea. It is obvious why the British don’t want to give the territory back to Spain, who ceded it “in perpetuity” back in 1713. At the entrance to the Mediterranean Sea and with views across to North Africa, with The Rock rising vertically on the north face to 1,398 feet, it has obvious strategic advantage and oversight of all shipping entering the Mediterranean ports.

We parked on the Spanish side and walked across the border, to avoid the queue of cars crossing the frontier. The only road going into the territory and city centre traverses the airport runway. We had to wait while a plane took off, aircraft having priority over traffic and pedestrians.

The city, ports and marinas nestle on the west coast. A cable car takes tourists up this sloping face of The Rock, to the nature reserve that covers forty per cent of the territory. The views from the accessible summit of The Rock are wonderful, while some areas remain out of bounds military regions. 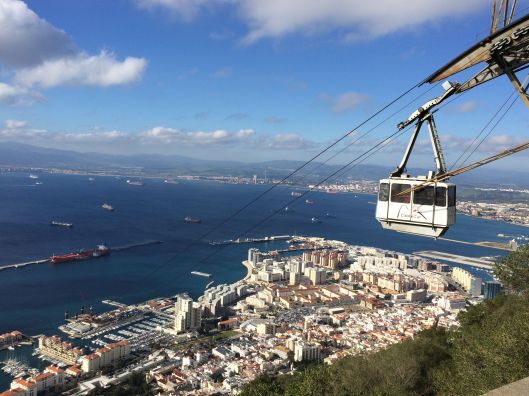 The Rock is home to several hundred Barbary macaque monkeys. They are curious, used to the tourists but are still wild animals and warning signs are clearly on display. The monkeys happily pose for photos but are opportunists if visitors have obvious food with them. 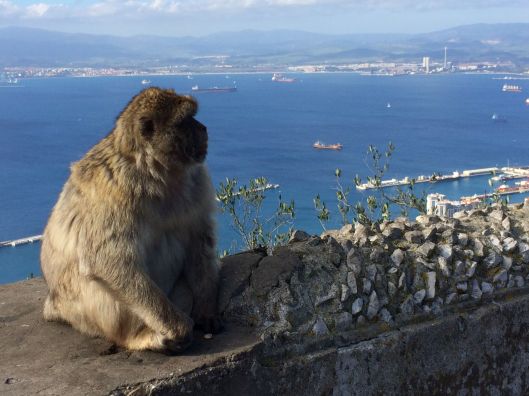 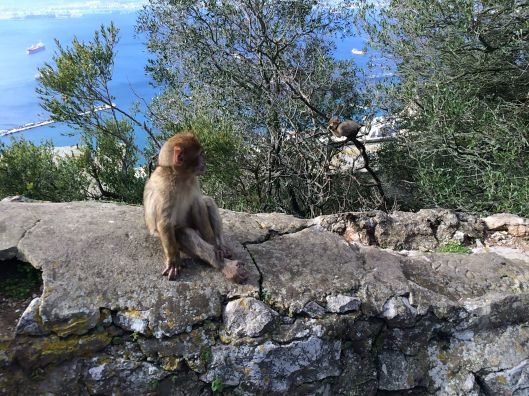 We walked back down through the nature reserve, via the Apes Den, the Queens Gate, The Moorish Castle, via cannons and entrances to the thirty miles of tunnels used as defences throughout history. Other paths went via the Mediterranean steps, St Michael’s Cave and Trafalgar cemetery. It was a long walk, which killed our middle aged knees at times, but a lovely way to appreciate the flora, fauna and views of this fascinating place.

I hope to visit Africa one day, but if I don’t, at least I have seen the tip of the continent from this tip of Europe.

Africa in the distance, below the clouds

4 thoughts on “Gibraltar – The Rock, the apes, stunning views and a long walk.”