If you’ve been following this blog for a while, you will have seen some of the beauty of Tasmania. You will sense our love of this place, this island at the bottom of Australia.

But there is something that I need to remember. Something that Aussie Mate grew up with, which is new to me in my midlife.

This place can be dangerous. It can be lethal.

Recent news has reminded me of this fact.

A few days ago I wrote about the trucks and boat trailers parked up on the coast, ordinary people going fishing and diving on a Friday. On Saturday, one of those fishermen was killed by a shark, whilst diving for scallops. He was a local man who worked for Hobart City Council. A guy doing something he loved in his spare time. He was an experienced recreational diver.

This was obviously big news here, especially following so soon after the amazing live footage of Aussie surf champion, Mick Fanning, escaping unharmed from a shark attach during a surf competition in South Africa.

It is not just sharks. There are deadly snakes and spiders here.

We have joked about snakes during some of our bush walks….
Aussie Mate – “I should walk ahead as I’m more likely to recognise a snake”.
Me – “OK”.
Aussie Mate – “Oh maybe I’ll stay behind you as I’ll know what to do if you get bitten”.

We had a stark reminder about snakes with this sign at Lake St Clair.

These photos were posted by family in Sydney suburbs a while back. A visitor to their balcony. 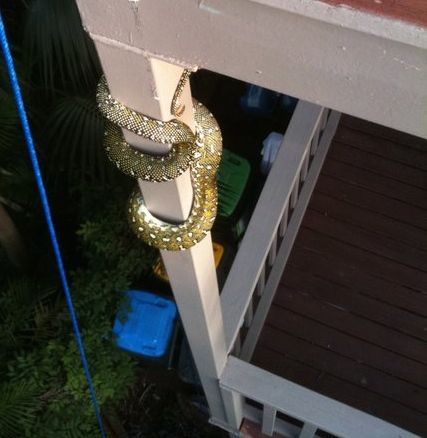 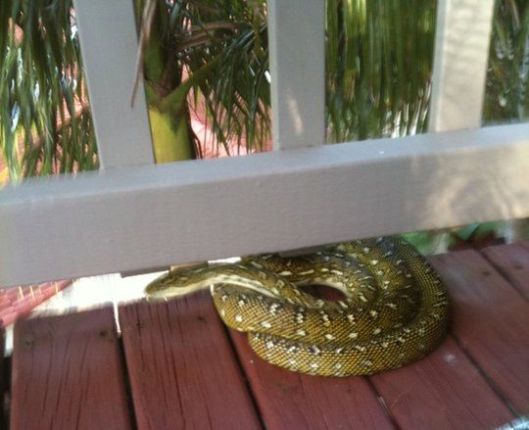 Other news this week is that thirteen new species of spiders have been discovered in Australia this month. Australia do not need any more spiders!

The first time Aussie Mate and I did some gardening in the UK, I was in short sleeve, sandals. He was covered from neck to toe, long sleeves, long trousers, boots and gloves. He kicked every stone and rock before picking it up. “So the spiders run away. You don’t want to pick up a rock and have a spider run up your arm”. Oh.

I know the names of red backs and funnel webs, the deadly spiders. But I probably wouldn’t actually recognise one. I will go and google them, right now.

On my first trip to visit in-laws in Sydney, one brother-in-law kept a funnel web in a jar on the dining table for several days. I think that was probably for my education and to emphasise that they are about in suburban gardens.

In our UK life, the wildlife that we saw were birds, foxes, occasional deer, badgers. Nothing dangerous beyond bees, wasps and stinging nettles.

I am keen to see the wildlife that Australia is famous for, but I mean the cute ones! Kangaroo, wallaby, possum, wombat, parrot, cockatoo, kookaburra, platypus, echnida and when we get to the mainland, koala.

I’m sitting at my dining table know, looking out to the estuary. I have seen a seal in the water from my window and at Hobart Waterfront. Neighbours say that there are dolphins and occasional whales in the estuary too.

I’m sure there were dolphins a couple of weeks ago. The Sunday yachts suddenly all stopped moving. It was like someone paused a movie. They all remained stationary and the people on board were watching something in the water.

I must remember that I am sharing this beautiful environment with abundant wildlife, all varieties, harmless and deadly.

3 thoughts on “Beautiful yet deadly”