We recently visited a historical model village, “Old Hobart Town”, which is an accurate model of the 1820’s town.

The first settlers to come to Tasmania – then known as Van Diemem’s Land – arrived from Sydney in a whaling ship. Twenty one convicts guarded by marines and NSW Corps, lead by a young Lieutenant Bowen, made camp at Risdon Cove in September 1803. A supply ship The Lady Nelson, arrived a few days later.

In February 1804, two ships arrived from Britain, lead by Colonel Collins, convicts, a few free settlers, plus guards and supplies. Collins had been a member of the First Fleet which had founded Sydney fifteen years earlier. He took rank over Bowen and deemed the original site unsuitable, moving across the Derwent River to a point on the west shore he named “Sullivan’s Cove”.

This settlement was named “Hobart” after the Colonial Secretary, Lord Hobart. The convicts that arrived with Collins were soon put to work, clearing the bush and putting up tents on the bank of the rivulet. The early months and years were tough, harsh, brutal.

Food and supplies soon began to run out and trusted convicts were allowed to hunt kangaroo in the surrounding bush to supplement the diet.

The small group was male dominated, convicts and guards. A few wives and children had travelled as free settlers along with their convict husbands. Female convicts began to arrive in 1805 from Sydney.

Although the colony grew to over four hundred, there were few young people. In 1807 and 1808 ships brought people from Norfolk Island penal colony to add to the population of Hobart. Marriages between the Hobart and Norfolk Island groups occurred and a new generation began immediately, allowing the new settlement to progress a decade before free settlers arrived from England in any number.

The colony grew. Large gum tress were cut down to build bridges and houses from the timber.

Hobart Rivulet runs down from Mount Wellington and provided drinking water but was also used as industries developed in the settlement, mills were built to make flour, tanneries to cure hides as well as the inevitable breweries and distilleries.

Sandstone was quarried and stone buildings appeared. Mainly government buildings such as the goal, bond store, commissariat store, but also some private homes and warehouses.

Here are some “then and now” photos, from the model village and Hobart today. 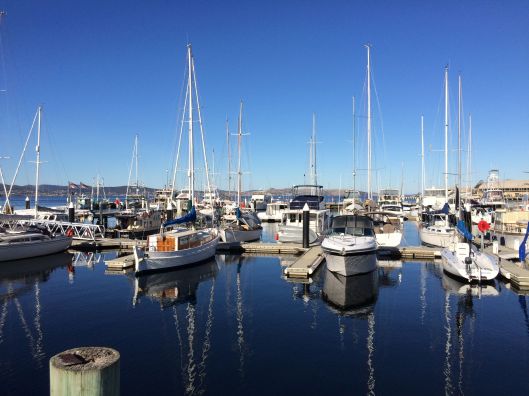 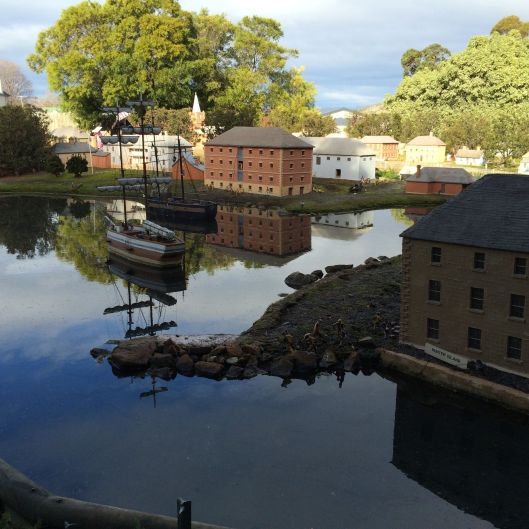 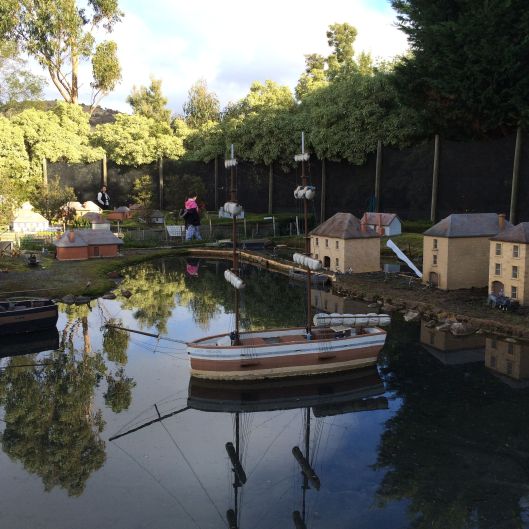 A causeway was built by convicts to link Hunter Island to the cove. Ships anchored in the river and on the island Men waded through the shallow waters or along the sandbar to bring cargo ashore from this “Old Wharf”. Later land was reclaimed and warehouses were built on the site. Today, there are markers on the pavement to indicate the line of the causeway.

Elizabeth Street was originally the footpath from the Governor’s tent to the rivulet. Now it is the shopping mall.

Hobart Rivulet was the fresh water source but soon became polluted. Later generations hid the rivulet underneath the growing city. Today it merges from a reasonable gully into graffiti covered cement gutters and tunnels.

The Bond Store still stands as part of Tasmania Museum and Art Gallery. 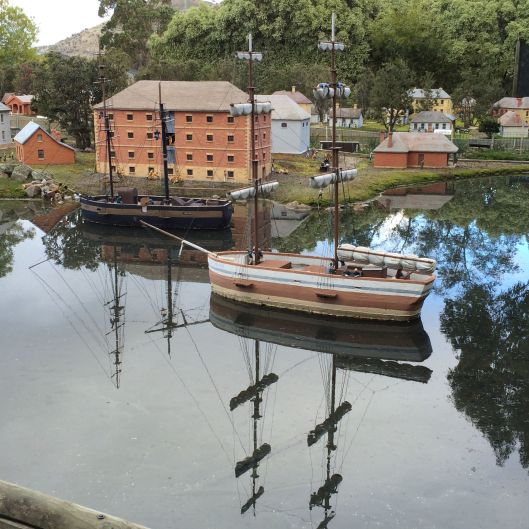 6 thoughts on “Hobart then and now”