The prompt for this week’s photo challenge is “creepy”.

Some people find cemeteries and gravestones creepy. They have been the backdrop for many a horror movie. I personally do not hold this view, but it is a good link to write about this unique wall.

For months we had driven past this short wall constructed from stones within a metal cage. One day we walked along the street and stopped to take a closer look. What an unexpected surprise.

In amongst the stones are remnants of headstones. The wall marks the site of an old burial ground. St George’s Burial Ground covered almost three acres. Although records are incomplete, the first internment occurred in 1846, with over a thousand burials until it’s closure in 1872. At this point, a new cemetery at Cornelian Bay replaced all of Hobart’s early burial grounds.

In 1928, only fifty years after it’s closure, St George’s burial ground was levelled and cleared to make way for the private homes and the school that we see today.

In 2010, building works at the school, unearthed skeletal remains and broken headstones. All are weathered and incomplete so it was impossible to identify the human remains. These are the remnants placed within the wall. 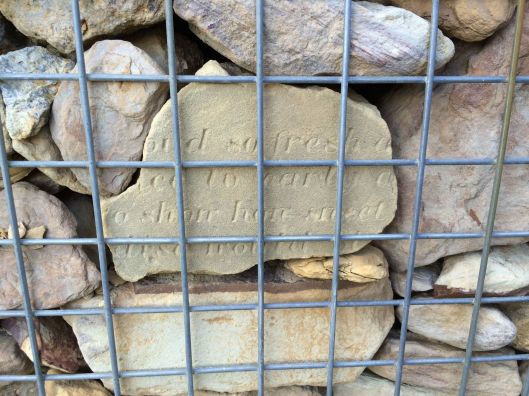 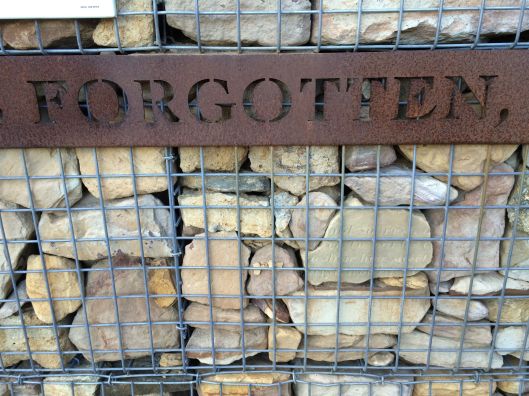 To add to the “creepy” aspect, one of the skeletons recently discovered, had saw marks on the skull and ribs, indicating that a post-mortem had been performed. In the early days of Van Diemen’s Land, dissection of executed convicts was common place. The Anatomy Act of 1869 was introduced to control such activity.

There are still random collections of grave stones on Hobart streets. Another sign of the growth of the city over the past two centuries. 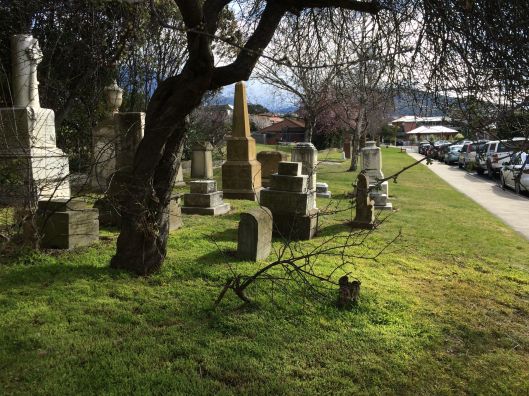