We have Masked Lapwing chicks on a small area of grass outside our windows. A public area than slopes down from the road and footpath, towards the river estuary.

I’ve been watching birds whilst doing the washing up, since we moved into this lovely rental apartment.

A couple of weeks ago, I noticed that a pair of masked lapwings were nesting. Just on the grass, out in the open. The parent birds would call and swoop on any intruders, people, kids, dogs, other birds. I’d hear them getting cranky with sparrows sitting on the fence or when someone inadvertently walked over the grass to look at the view. A neighbour said that they’ve nested here in previous years.

So I’ve been waiting for the chicks to hatch. And this morning, there they were. Three cute little chicks walking around.

A few years ago we had a nest of robins in our garden shed in the UK. Those chicks were scraggy featherless little mites for the first few days, relying on parents to bring them food. The lapwings are fluffy balls on long legs, born with a full covering of down who leave the nest and feed themselves within a few hours of hatching.

At the first sign of danger or a call from the parents, the chicks bob down and are completely camouflaged. Even when you know they are there, they are difficult to spot until they stand up again. They are so adorable.

Here is some information from the Tasmania Parks and Wildlife website.

The Masked Lapwing, also commonly known simply as “plover”, is a conspicuous bird with loud, penetrating calls. It is a bold animal that swoops at intruders – including humans.  Its apt scientific name – Vanellus miles – comes from the Latin for soldier and refers to the spurs on the wings, which give an armed appearance.

Habitat
Masked Lapwings occupy a wide variety of natural and modified habitats, usually near water. In urban areas they frequently occur on roadside verges, playing fields, parks airstrips, golf courses and almost anywhere there is some greenery and water. Adult birds remain in the general area from year to year and chicks rarely move more than 10 km from the nest site.

Breeding
Breeding occurs in late winter to early spring. Birds pair for life and take up territories in May-July. Only 35% of nests are used in subsequent years. Between 3-4 eggs are laid. The incubation period is 28-30 days.

Young leave the nest almost immediately after hatching, and some young leave before all eggs have hatched. The young are guarded by both parents when small and may scatter over as much as 200 m if disturbed, with each adult guarding the chicks closest to it. The young follow parents but find their own food. Young usually fledge at 6-7 weeks but may vary from 5-8 weeks. Many families stay together after the young can fly. Birds can breed in their first year.

Here are a couple of internet photos of the chicks. 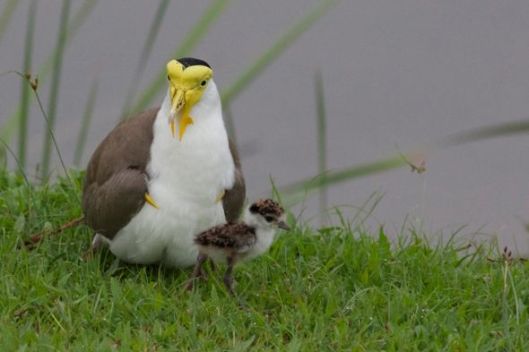