Jointly, we now hold the world record for the most people stargazing at the same time, at multiple venues, within one country.

At the Australian National University (ANU) in Canberra 1,869 people set the record for stargazers at one location. An adjudicator from Guinness World Records had travelled from London to witness the event and confirmed the new record on the night.

As all participants had to be looking through a telescope for the record, ten thousand commemorative telescopes where imported into the country. They were a similar size to the one used by Galileo when he sketched the moon and discovered the four inner moons of Jupiter, back in the early seventeenth century.

Aussie Mate and I joined over five hundred people at a primary school in Huonville. We’d seen the event advertised as part of National Science Week. As my telescope is in a storage unit in London, we bought two of the small telescopes.

We both felt rather odd being in a school without our kids, being in a school that we had no connection to. But the event overtook any weirdness. I experienced my first “sausage sizzle”, barbecue food, home made cakes.

The actual record attempt was well organised. Everyone taking part registered and were given a number. We then congregated into small groups, with numbers ticked off. Everyone then funnelled through a gate into the open viewing space, with numbers recorded again to ensure accurate counting of the stargazers for the ten minute viewing window.

It took a while to collate the data from all the Australian sites. A few sites could not participate due to rain. All data was then sent to Guinness Records for verification.

The record has now been confirmed and is listed on the Guinness World Record website. 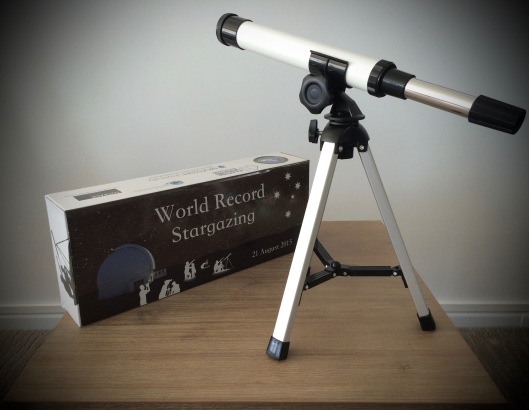