“Thousands of soldiers dressed in First World War uniforms appeared in towns and cities across the UK as part of a live public memorial, to commemorate the 19,240 men who died one hundred years ago on the first day of the Battle of the Somme.” 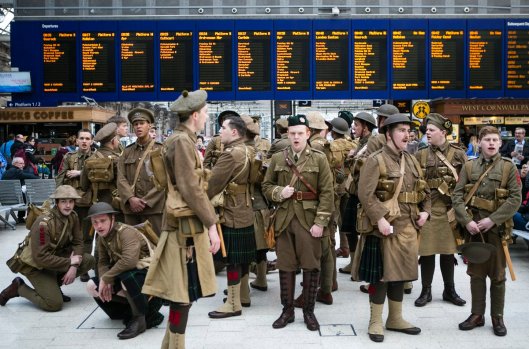 “The modern day participants were seen walking, some sitting and waiting, all silent apart from the occasional burst of song.”

“Many people described how they had tried to approach the ‘soldiers’ to ask them what they were doing. In each case, the men remained silent and simply handed out a white card which displayed the name, age, rank, battalion and regiment of a real soldier who had died at the Somme on July 1, 1916.”

“The project, marking the centenary of the Battle of the Somme, was conceived by artist Jeremy Deller and the National Theatre’s Rufus Norris.”

“This has to be one of the most meaningful UK public art projects of recent times.” 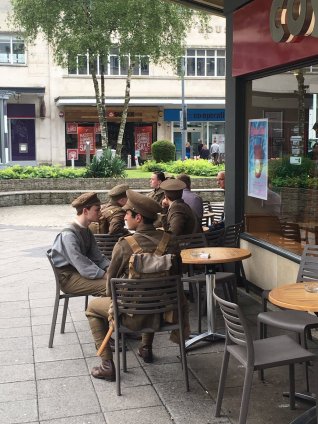 The above words and the photos are from the internet.

The following words are mine.

I really wish I had been in the UK on Friday to witness this event. Such a simple yet effective commemoration.

I have various poignant memories and images that relate to WW1 – the daily ceremony of the Last Post at the Menin Gate  in Ypres – Tyne Cot cemetery in Belgium – the Tower of London Poppies.

Even though I have not experienced this event first hand, these images are now in my memory bank along with the others.