On 5th January 1975 a ship hit Hobart’s Tasman bridge, bringing down two pylons and 72 meters of roadway. Tragically 12 people were killed, 7 crewmen and 5 motorists as cars plunged into the water.

Emergency services and local residents rushed to help. Montagu Bay was the main launch point for searchers, hence this memorial in this pretty bay. 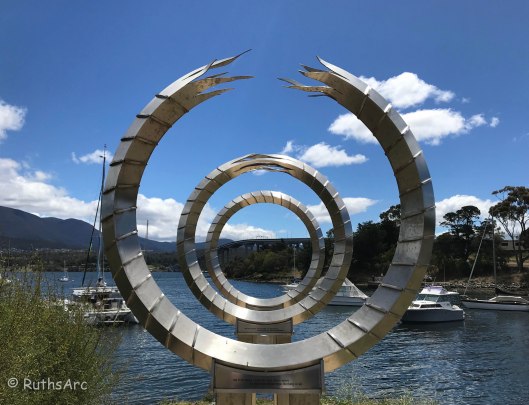 The Eastern Shore was cut off from Hobart’s city centre. What had been a five-minute drive across the bridge became a ninety-minute journey. Ferries were soon transporting over thirty thousand people a day across the river to work, to school, to hospital, to the airport. A vehicle ferry was also in operation as priority to carry ambulances between the suburbs. Power lines, telephone lines and water pipes were also impacted and needed repair.

The “Lake Illawarra” ship is still on the river bed, causing the replacement pylon to have a different position and the new roadway to have a noticeably wider distance between pylons. The bridge was reopened in October 1997.

The Eastern Shore became more self-contained communities as a result of the disaster and a second bridge, Bowen Bridge, was built a few miles upstream, in 1984.

5 thoughts on “The day the bridge came down”