Dead roses have their own beauty but it’s time to throw them out. 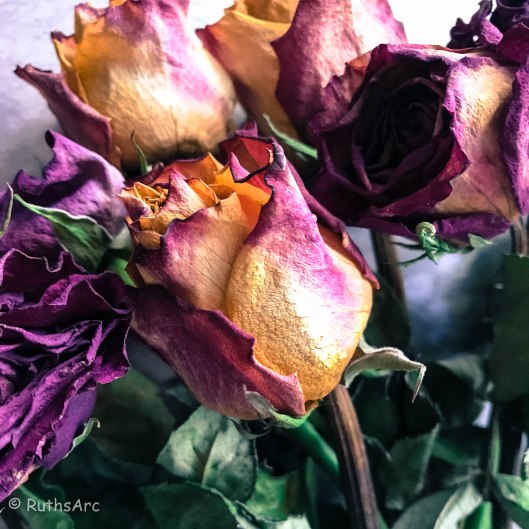 It’s the last weekend of Hobart’s annual winter festival. There are various art installations across the city for “Dark Mofo”.

Here are just a few of them. Free, large scale, installations, open to everyone. Art that engages you, surrounds you, absorbs you, promotes discussion.

“Leviathan” by Matthew Schreiber
A massive geometrical sculpture wrought from lasers and light. 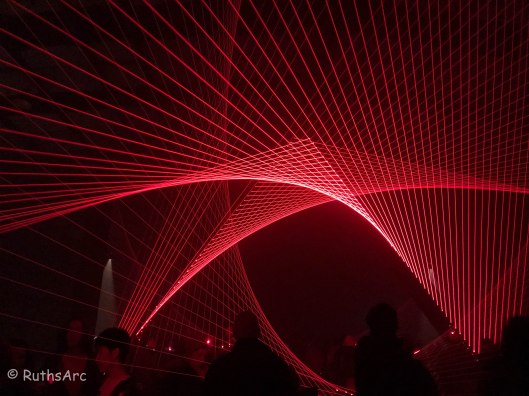 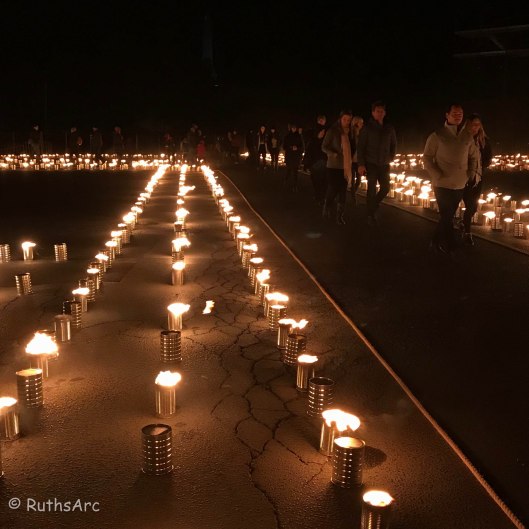 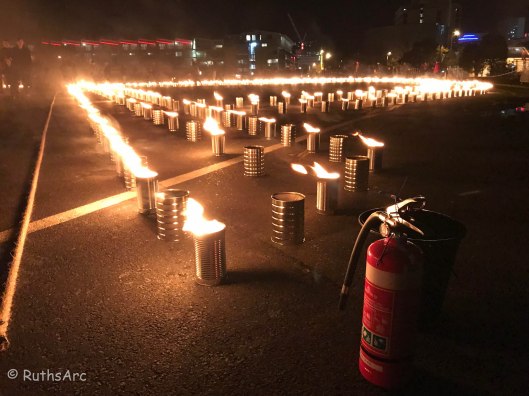 “Spectra” by Ryoji Ikeda
49 searchlights that reach up to 15 kms into the night sky. A beautiful, spiritual experience, especially in the rain. 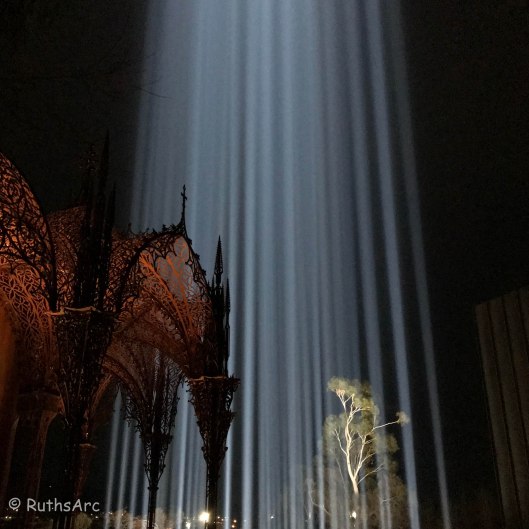 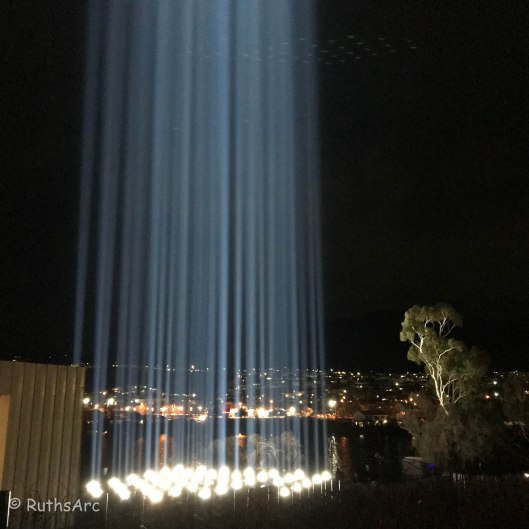 This is the view from our place, 15 kms from Spectra’s location. 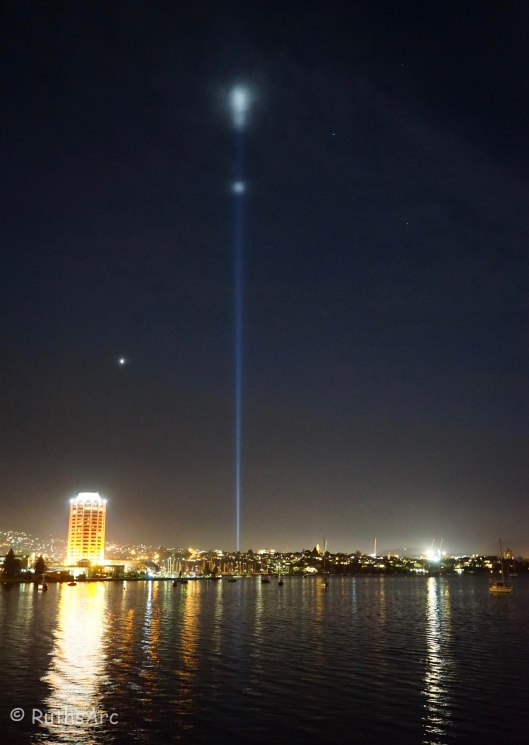 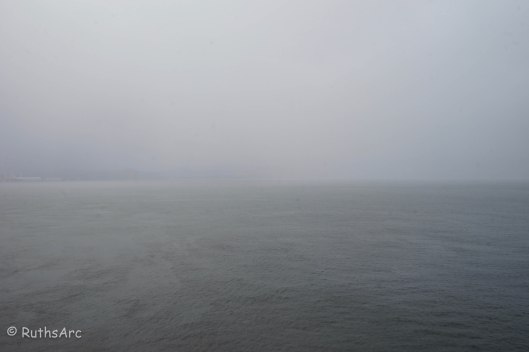 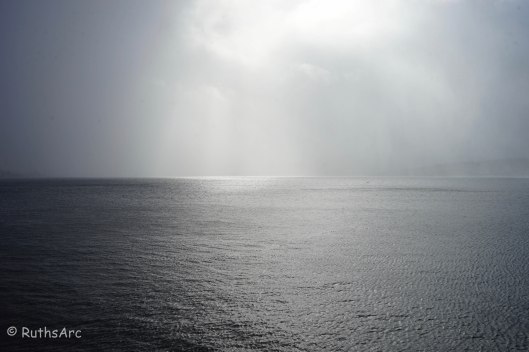 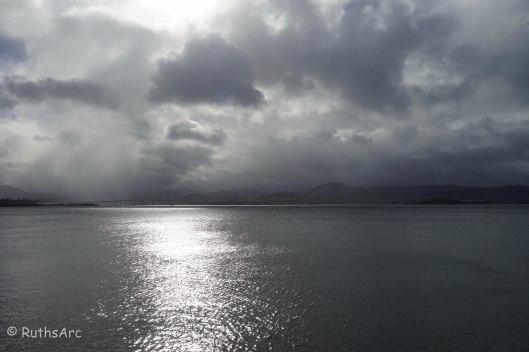 Customs House from Constitution Dock and up close.

Reflections as I got out of our car. 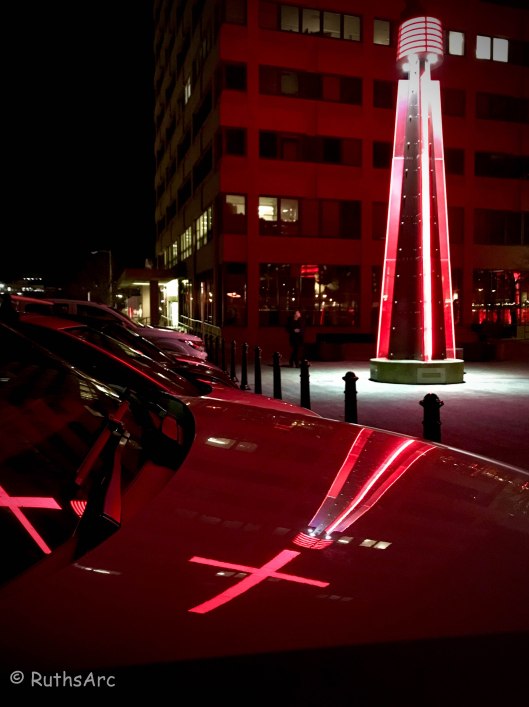 As Hobart prepares to welcome it’s annual DARK MOFO festival, the city is glowing a warm red colour. Multiple buildings and structures are lit by red lights. These were the first to “paint the town red”.

This is the Tasman Bridge which crosses the River Derwent, linking the city to the Eastern Suburbs, airport and East Coast scenic route and Tasman Peninsular. 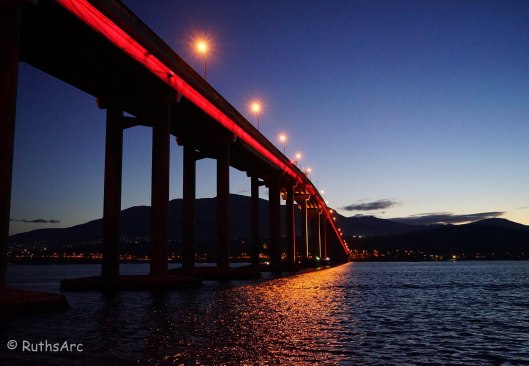 This is Wrest Point Hotel and Casino.

This is Willow Court. A three-sided building with verandah, surrounding a central quadrangle. It dates back to 1830. 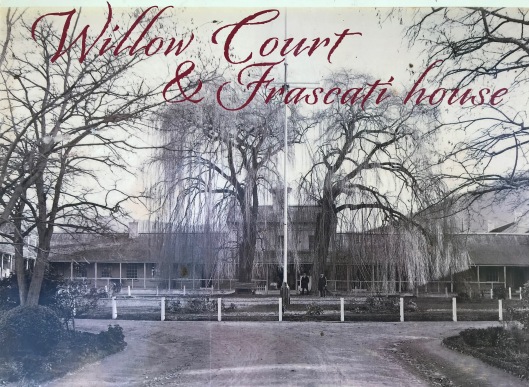 Originally, it was a barracks for sick and infirm convicts. Other buildings were added to the site, 23 in total between 1830 and 1968. 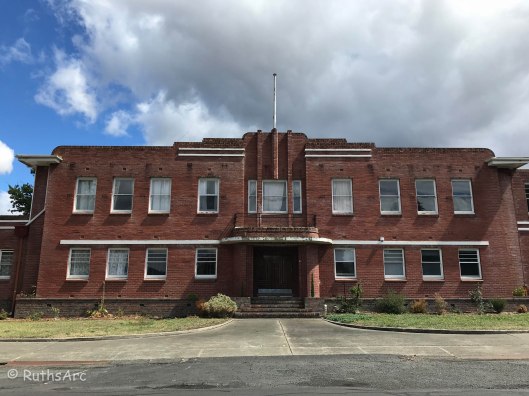 Over the years, the name of the institution housed here changed … invalid depot … lunatic asylum … hospital for the insane … mental diseases hospital. These names reflected changes in the community and government attitude towards intellectual disability and mental illness.

In 2000 Willow Court closed its doors as patients were de-institutionalised and cared for within the community. Tasmania was the first state in Australia to adopt the “social model of care”.

Communities were left with large empty buildings and equally large maintenance bills, often too much for small municipal councils or state governments to bear through their rate payer/tax payer base. Theft, arson and vandalism all added to already growing problems of natural decay.

Today, some buildings have been renovated and re-purposed. A popular restaurant, a motel, antique shops, sets for film and tv filming, for art installations. There is talk of a museum. The Antique Shop is a fitting companion, linking items from the past to these historical buildings,

Other buildings continue to decay whilst new owners are sought. 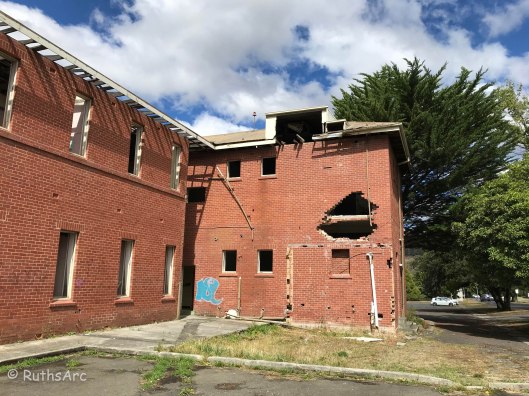 Willow Court is of national significance as an asylum that was in continuous use for 170 years and as the first to close. It is still used in the education of students in disability, aged care and mental health.

… when the lunch venue you were looking forward to is closed.

What do you do when you race for the ferry with four minutes to spare, but it’s already full so you wait an hour for the next one. You take random photos and let the grandson drive! 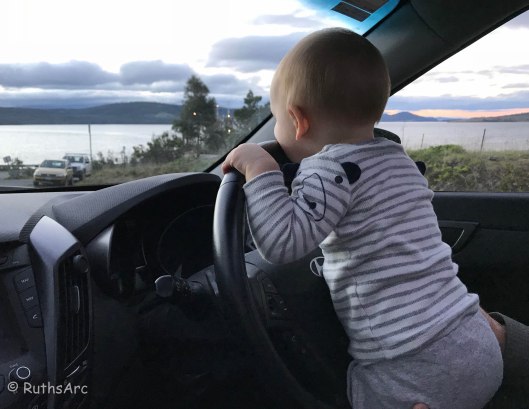 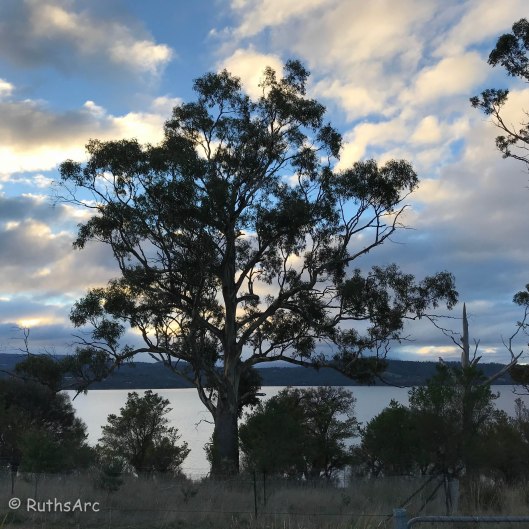 We’d had a lovely Monday exploring Bruny Island, a twenty-minute ferry ride from the mainland of Tasmania. An island off and island off the island continent of Australia.

This is the final Weekly Photo Challenge and we’ve been asked to share our favourites.

I’ll miss this challenge, opening my eyes to find a photo for the weekly theme, seeing how other bloggers have interpreted the prompt, being inspired by other people’s photos and techniques. Thank you to everyone who has liked and commented on my contributions over the past three and a half years x 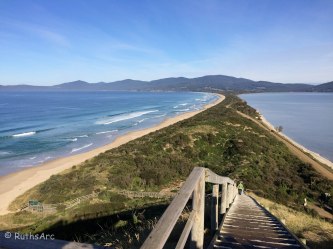 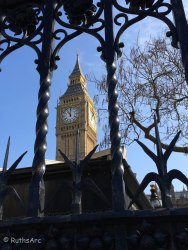 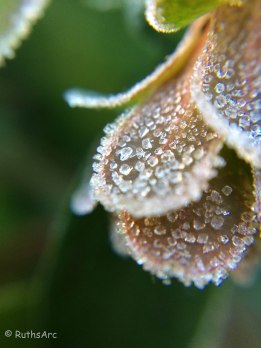 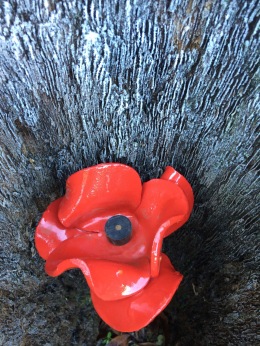