Cadiz on the Atlantic coast, is almost entirely surrounded by water. It is one of the oldest European cities, again with Moorish influence but with more of a Spanish feel. There are several castles and defences as well as the typical churches, cathedral and city walls. It is interesting hearing another view of familiar British history, during Elizabeth I reign, Sir Frances Drake raided Cadiz and the ships of the Spanish Armada sailed from here. A pleasant day browsing the narrow streets, squares and along the sea front.

One of the joys of budget airlines is the time of their flights. The flip side of travelling to the airport in sub zero temperatures and waiting for the car park shuttle bus in the cold and ice before dawn, is that we were in Seville before midday local time and in 19 degrees C, sunshine and clear blue skies.

What a beautiful place. What a surprise. A city of contrasts, small enough to explore on foot once we got our bearings from the hop on / hop off tour bus.

I expected to see some orange trees, but not so many, lining every street in the city, fully laden with fruit. The are wide avenues, with trees either side, a cycle lane, then footpath, giving a feeling of such spaciousness. As well as the orange trees, there are tall palms, cypress and others. There are expansive parks and formal gardens. 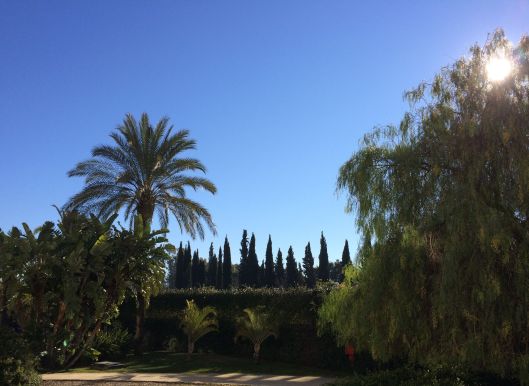 Much of the architecture of Seville has influence from the Moors, the muslim Moroccan conquers who occupied much of modern day Spain, Portugal, southern France, Sicily and Malta for several centuries.

There are city walls in La Macarena area dating back to the 12th century. There are old narrow streets, and patios in the Santa Cruz area. There are churches, cathedrals and towers. There are plazas with ornate tiles and mosaics. There are colourful buildings along the river, modern and old bridges. 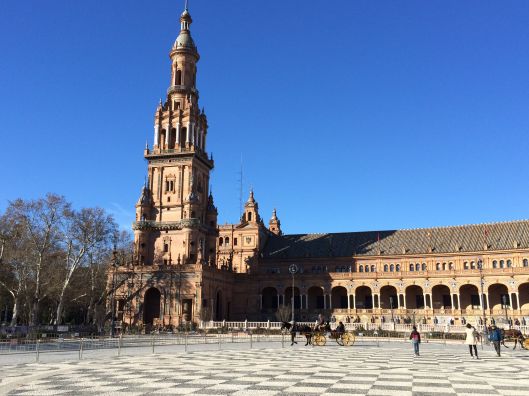 The Metropol Parasol is a modern structure that has sky walkways and amazing views across the city rooftops. When this structure was being excavated in 1973, Roman ruins were discovered, which are on display next to the entrance to the sky walk. This sums up the history and contrast of the city. The entrance fee for the sky walkways is the best Euro 3 that I’ve every spent.

Seville is just so much more than we anticipated, just right for a winter visit. It’s jumped straight into my top five European cities.